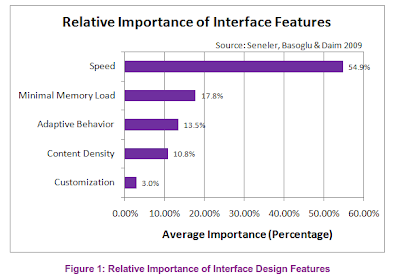 Customization (bottom of the list of site desirables) = decoration and embellishments. It’s out of vogue with viewers. The new trend in web design is simple and austere. Those features combined produce speedier page load times. “Content density” is how many pictures and words are crammed onto the page. People want low density, simple messages for faster comprehension. These desirables are the opposite of what websites production is today. This is because business owners and designers aren’t listening to the audience. The audience doesn’t want what’s been served up for the last decade. They want change. And more than anything they want SPEED!

A year ago, enough people downgraded their highspeed bandwidth to cause ISPs to charge new “downgrade fees” (usually about $5.) Another chance to make a buck! Highspeed monthly rates are a little less than $40 –nationwide average. People feeling the pinch for dollars did NOT discontinue services generally but elected to work-and-play with less.

USA Unemployment and Penny Pinching
So will employment go up thus improving the Internet bandwidth situation. Um? I think not. We have several waves to ride out caused by changes in the GLOBAL economy. Bailout begets bailout internationally. This sounds pretty pessimistic, I know. The point I’m making is there now is a demand for unadorned and faster websites. It’s driven by need and wish. People wish the web was faster. But it won’t be for sometime. The solution IS leaner, smaller websites –economy of scale and less bloated gluttony of bandwidth. As one article put it, the Internet went from “Primitive to Complex and now to Simple.” We’re being forced to move into the “simplify stage.” The Internet isn’t going to collapse! It’s just will be unpleasantly slow and sometimes painful to use.

ISPs Pullback Building Business
With the downturn in the economy, Internet Service Providers (ISPs) are not upgrading their capacity to match demand. In fact, they are limping along propping up an overloaded system. Internet connections are slowing down because of this delay in upgrading. Streaming video, YouTube, SPAM, and mammoth downloads are some culprits hogging bandwidth. Saturation! I think we’ll be seeing more communication company mergers.

Alternative Budget
Instead of dropping highspeed, people are opting to drop cable TV and watch online. This only creates more demand for bandwidth. The pipe isn’t getting bigger. Things are tightening.

What About Fiber Optics 100X Speeds?
Idealists and Utopian technocrats are preaching converting copper to glass and connecting America for higher access speeds. This conversion to fiber optics isn’t happening soon. We say, “Yeah, but they did it in Japan!” Ahem. Japan is a tiny island nation -smaller than most of our states. We have a lot of mileage to cover in the USA. Is it realistic to say this “growth” will happen during bad times? Perhaps by increasing the money supply (inflation) the government can bankroll it. But how long would it still take for the conversion? Years or decades? Interestingly, Google is giving “matching-fund” grants to rural communities for installation of fiber optics. But Google alone can’t bear this burden.

So grassroots innovation in website efficiency is the stopgap and edge –until better times.

“As we’ve become a high-def, two-way, video-on-demand society, we’re overloading the wires and, especially, the airwaves along which our data travels. The result is going to be a three-year slowdown of the Internet experience, with more expensive connections and innovation turning toward efficiency rather than extravagance.”
http://www.pcmag.com/article2/0,2817,2344696,00.asp

“Monopoly economics on the wire-line side and inadequate networks on the wireless side means we’re not going to see cheap, unlimited Internet over the next few years. The result of this mismatch between applications and infrastructure is going to hurt everyone at the start, but don’t underestimate clever technologists. Bandwidth will become a currency. Web pages will get more basic; marketing bloat will decrease.”

The Great Internet Slowdown
http://www.pcmag.com/article2/0,2817,2344697,00.asp
“We’re entering an era of efficiency —of doing more with less bandwidth. That doesn’t mean we’re going to stop innovating. It just means we’re going to do it with fewer bits.”